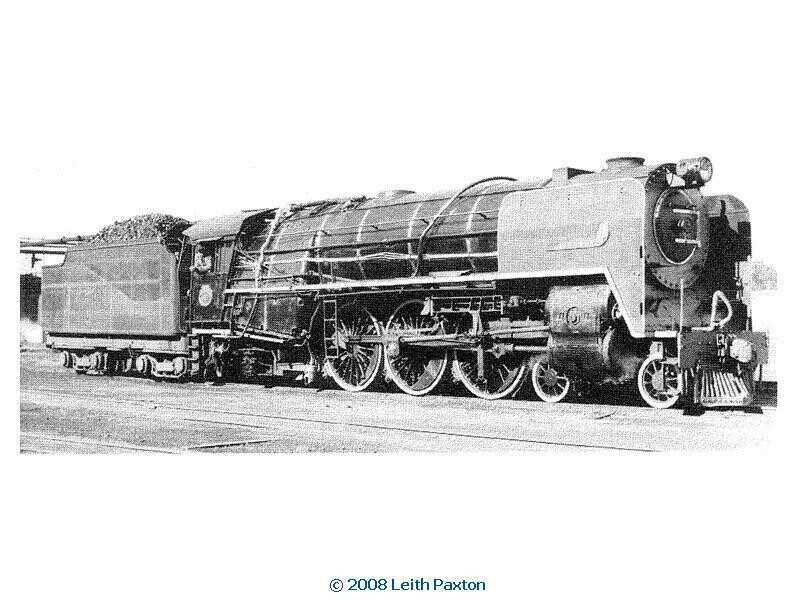 Following the Great Depression in South Africa of 1930-1933, the South African Railways (SAR) set out to improve its Cape Town-Johannesburg express passenger service. To attain higher average speeds for its more important express trains, the Class 16E 4-6-2 Pacific type locomotive was designed by A.G. Watson, Chief Mechanical Engineer of the SAR from 1929 to 1936, specifically for use with the Union Express and the Union Limited trains. Six locomotives were built by Henschel and Son in Kassel, Germany and delivered in 1935, numbered in the range from 854 to 859.

With its 72 inches (1,830 millimetres) diameter coupled wheels, the Class 16E was considered the most remarkable Cape gauge express passenger locomotive ever built. It had the largest fire grate on any Pacific outside North America. The coupled wheels were the largest ever used on any less than 4 feet 8 1⁄2 inches (1,435 millimetres) standard gauge locomotive and it had an all-up weight and tractive effort equal to or exceeding that of most Pacifics outside North America.

Watson experienced considerable difficulty to keep the axle loads within the permissible limits specified by the Chief Civil Engineer, with the result that the ashpan, cab, side running boards and several other parts were made of thinner material than usual. Even the original number plates were cast in aluminium. Still, the axle load of 20 long tons 19 hundredweight (21,290 kilograms) was the heaviest of any engine or vehicle on the SAR at the time.
Along with the Class 15E Mountain type of 1935, the locomotive introduced the Type JT tender with a coal capacity of 14 long tons (14.2 tonnes), a water capacity of 6,000 imperial gallons (27,300 litres) and an axle load of 17 long tons 15 hundredweight (18,030 kilograms).
The main bar frames were machined from rolled steel slabs and each frame was in one piece from the front to the hind buffer beam. The wheels were fitted with hollow crank pins, while the leading bogie was fitted with an oil bath centre pivot. The connecting and coupling rods were fitted with floating bronze bushes and were made of special chrome-nickel alloy steel of fluted section. The centre driving set of coupled wheels were flangeless and had wider treads than the other two sets to prevent them from slipping off the rails in sharp curves.
To obtain increased tractive effort with the large coupled wheels, larger cylinders of 24 inches (610 millimetres) bore by 28 inches (711 millimetres) stroke were used. These, at a boiler pressure of 210 pounds per square inch (1,448 kilopascals), gave the locomotive a tractive effort of 35,280 pounds-force (156.9 kilonewtons) at 75% of boiler pressure. Each cylinder was cast integral with half of the smokebox saddle, which made the castings interchangeable.
The drive shafts that turn the poppet valve camshafts are no different from those found under most rear wheel drive cars and trucks
Given the successful operation of rotary cam poppet valve gear on the Class 19C, it was also used on the Class 16E. The valves were driven by outside rotary propshafts from turning mechanisms mounted on the driving coupled wheels. The valves were double-seated and housed at each end of the cylinders, an arrangement that resulted in short and straight ports between the valves and the cylinder barrels. The admission valves were 8 inches (203 millimetres) in diameter and the exhaust valves 9 inches (229 millimetres). Most of the detail parts of the rotary cam gear, particularly the main drive and reversing gear, were interchangeable with similar parts on the Class 19C. The poppet valve gear gave the engine extremely free-running characteristics.
The Class 16E was delivered with a Watson Standard no. 3A boiler, one of the range of standard boiler types designed by Watson as part of his standardisation policy. The boiler was designed for a maximum working pressure of 225 pounds per square inch (1,551 kilopascals) and the boiler barrel plates and firebox outer shell were of nickel steel. The boiler and the firebox were entirely clothed with Alfol insulation.
At 9 feet 3 inches (2,819 millimetres) above rail level, the Class 16E boiler centre-line was the highest-pitched on the SAR at the time. Because of this and the limitations of the loading gauge, the boiler was domeless with an inspection manhole on top of the boiler barrel where the dome would have been. Steam was collected through numerous small feeder pipes fixed into two collector pipes which were arranged as high as possible above the water surface. The collector pipes then joined together to form a main steam pipe, 7 inches (178 millimetres) in diameter, which led to the superheater header and multiple valve regulator located in the smokebox. The steam pipes from the header to each cylinder were 6 inches (152 millimetres) in diameter. The boiler was fitted with two large Pop safety valves mounted ahead of the firebox, one on either side of the boiler and angled about 80 degrees apart.
The firebox had a power-operated Ajax fire-door and the grate was of the sectional pin-hole type, fitted with power-operated shaking gear. To assist in keeping within the axle load limits, the ashpan was constructed of relatively thin anti-corrosive steel plates of a special heat-resisting quality. The brick arch was supported by five 3 inches (76 millimetres) diameter arch tubes. The firebox was fitted with SAR standard type flexible stays and to allow easier access to the stays, the engine was equipped with a Watson cab with its slanted front which, like the Watson Standard boiler, was to become the standard on later SAR steam locomotive classes. The cab was of special light steel and was welded throughout.

Save this product for later
Display prices in: GBP