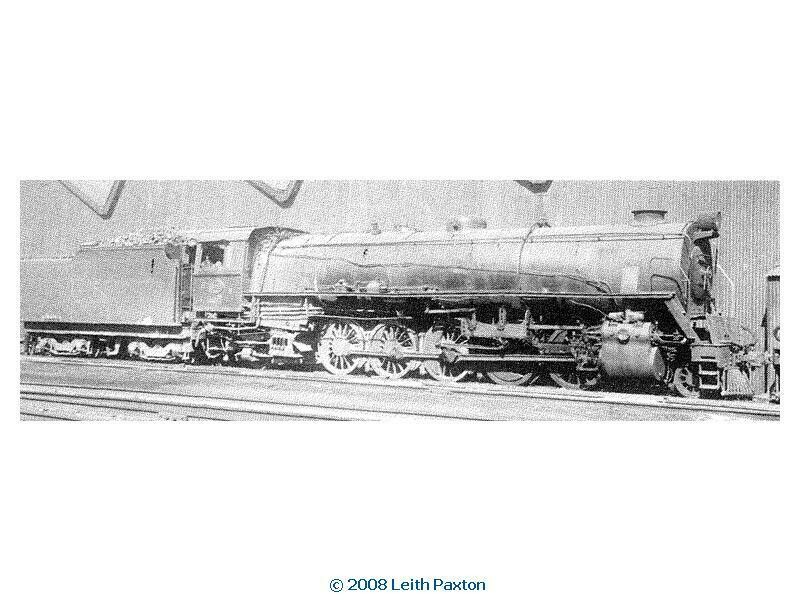 Characteristics
They were very powerful three-cylinder locomotives. At the time, three-cylindered locomotives were being built in appreciable numbers in Europe and America. Factors in their favour were their more even turning moment, improved balancing and better distribution of crank-pin thrust. Drawbacks were increased complexity and higher repair cost.
When delivered, the third cylinder was clearly visible, but plating was subsequently added beneath the smokebox and hid it from view. These were the most powerful non-articulated steam locomotives to see service on the SAR, with a tractive effort of 53,650 pounds-force (239 kilonewtons) at 75% boiler pressure and capable of hauling loads of 1,800 long tons (1,829 tonnes) over the ruling gradient of 1 in 100 (1%) on the Witbank-Apex section.
Contemporary Henschel publicity appropriately referred to them as the "Henschel Giants". They were larger in most respects than Deutsche Reichsbahn's new Standard gauge Class 44 three-cylinder 2-10-0 locomotives. Although their all-up locomotive weight was almost the same, when considering the fact that the SAR's Cape gauge Class 18 had shorter axles and frame stretchers, saving weight that could then be built into other items such as the firebox, the Class 18 was the larger locomotive.
The Class 18 had a round-topped firebox with a combustion chamber and with arch tubes supporting the brick arch. It was fired by a Duplex D.4 type mechanical stoker, operated by a four-cylinder steam engine on its Type HT tender, which had a coal capacity of 14 long tons (14.2 tonnes), a water capacity of 6,000 imperial gallons (27,300 litres) and a maximum axle load of 19 long tons 8 hundredweight (19,710 kilograms).
To allow the locomotive to negotiate curves of 320 feet (98 metres) radius despite its long coupled wheelbase, the third and fourth pairs of driving wheels were flangeless. In addition, the locomotive made use of a Krauss-Helmholtz bogie system, where the leading pair of driving wheels has a limited amount of sideplay with an articulated link to the leading bissel bogie. The bissel bogie was connected to a sleeve around the first driving axle so that any displacement of the bissel bogie in one direction would cause a similar displacement of the leading driving axle in the opposite direction, thereby steering the driving wheels through curves.
The outside cylinders drove the third pair of driving wheels while the inside cylinder drove the second pair through a cranked axle, with the cylinder mounted in an inclined position. The three cranks were arranged at an angle of 120 degrees to each other, allowing for the inclination of the inner cylinder.
Save this product for later